skip to main | skip to sidebar

Bloody Blast From Halloween Past


Another chick fight breaks out between our friend Stevie and some gutterpunk. I crank the Dead Kennedys, Halloween, over the sound system.
Poggi's roach coach serves tacos to the gathering spectators. 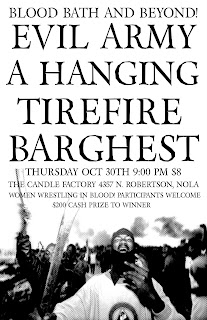 Hahaha, quite a yarn, a very good read. Sorry I've been a stranger round here, but it looks as though your time is spent elsewhere. Keep them coming bro, always enjoy what you have to say.

Welcome to my world. Well, not entirely my world, because I really do have a life outside the internet, albeit questionable at times. The purpose of this blog? I'm mostly going to be sharing good stuff here. Because for me, that's what life is all about. Without the good stuff, you're not really living life. I've been dealt enough shit in my life to have left my subconscious mind in a state of post traumatic stress, but I don't let that get me down. Instead, I feed my appetite for the good stuff in life, which pretty much manifests itself in my obsession with music. I have made rock and roll my religion. Going to shows, playing in bands, writing about bands, photographing bands, recording bands, collecting records, fanzines, t shirts, buttons, etc., these are the rituals of my religion. Some may think I have tunnel vision, or call these things distraction, I call it focus and inspiration.

"Life! Life is the only thing worth living for!"-Flipper

To download Mp3s from this blog, simply right click and select "save target as" or "save link as". Enjoy, and buy the whole cd from the bands when they play your town.

Billy Druid
Shangri La, Antarctica
A joke about musician Chris Squire, whose short list of past band affiliations includes Heroin, Tit Wrench, Labrador, The Mach 5 Overdrive and Tiltwheel, is that he's 107 years old, though he doesn't look a day over a weathered 27. That's because he's been entrenched on the front lines of San Diego's music scene for decades, and if it's true, he's a damned rambunctious, busy centenarian. -Ken Smith, San Diego City Beat 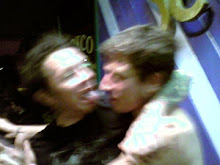